Something In the Middle

This next set sits somewhere in the middle between a fancy dress and play clothes.  It's dressy enough for many occasions but kid friendly enough for everyday wear. 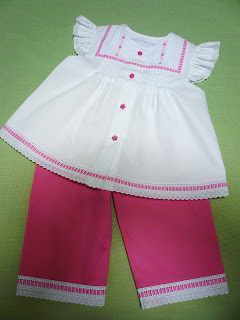 The swing top and capri pants are made from 100% cotton pique - probably one of my most go to fabrics.  It's lovely to work with, is durable enough to hold up to what most kids dish out, and washes very nicely. 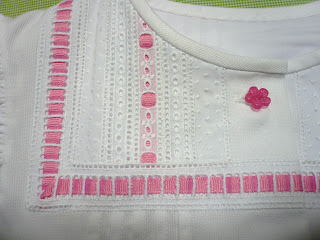 The swing top has 5, 1/4" released tucks across each front overlayed with a block of joined Swiss insertions and beadings. 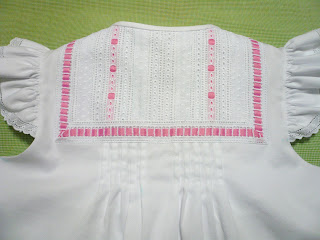 The same tucks and Swiss insertion block is repeated across the back of the top.  The angel sleeves are trimmed with coordinating Swiss edging.  The swing top has a partial lining to allow for a nice finish around the arms eye. 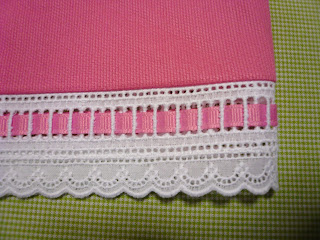 The bottoms of the swing top and capri pants are finished off with the Swiss beading and Swiss edging joined to look as one piece.  This will be another of my class proposals for the Martha Pullen School in 2013.  ﻿
10 comments:

Is There Still Room for the Traditional?

I think I am a dinasaur.  I think the little girl sewing world might have moved to a place I just can't go to.  Don't get me wrong - I think alot of it is quite charming but it's just not me.  I'm stuck on the traditional.  I keep pondering the possibility of William and Kate producing a royal daughter and the possibility (the quite real possibility) of Kate choosing to dress her in a very traditional style.  I think it would make people like me instantly 'cool' again.  Just think, everytime you looked at the cover of a People magazine there would be a little girl in a traditional smocked dress.  Now that's progress for us dinasaurs.  Let me know what you think about this.

So, in the spirit of the traditional I have a few photos of another project I will most likely propose to teach next year at the Martha Pullen school. I love ( repeat LOVE!) real dotted Swiss. It has a beautiful hand, is quite wrinkle resistant, and washes beautifully. Anyone born in the 50's or 60's will surely have a memory of wearing a dotted Swiss dress. 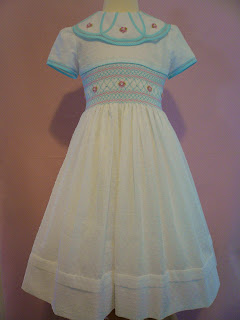 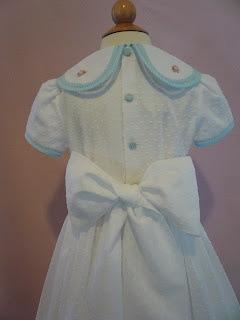 I picked the dots out of the fabric in the area to pleated. It leaves you with a nice plain surface to smock on.  I also interfaced the area to be pleated with a lightweight fusible interfacing.  The dotted Swiss is very fine and pleats down to almost nothing.  The interfacing adds fullnes to your pleats and makes it much nicer to smock on. 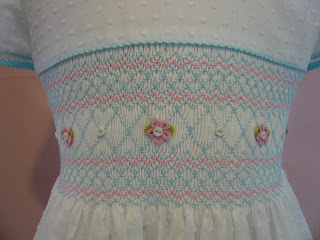 The teardrop collar is made from plain white Swiss voile and trimmed with shaped premade robin's egg microcheck spaghetti bias.  The two bias edges are joined with a hand 'bridging' stitch.  A few cast-on stitch posies help bring some of the pink in the smocking up into the collar. 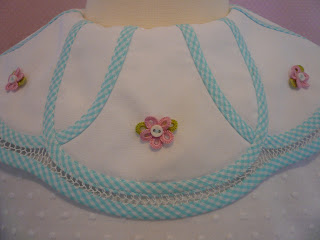 I'm very lucky to have daughter's who still will dress their daughter's in traditional style dresses.  I'm counting on Kate to help bring some of this back.  But, even if she doesn't, I'll probably stay right where I'm at.

Gail Doane
Gail was born and raised in Canada and now lives just outside Salt Lake City, Utah. Mostly self-taught, she is detail oriented but prepared to 'break the rules'. A self-described heirloom sewing addict, Gail brings to the classroom 30 years of experience, having dressed seven children, and now an ever-expanding number of grandchildren, in beautiful heirloom clothing. Her work first appeared in Australian Smocking & Embroidery in 2000 and Inspirations in 2008.